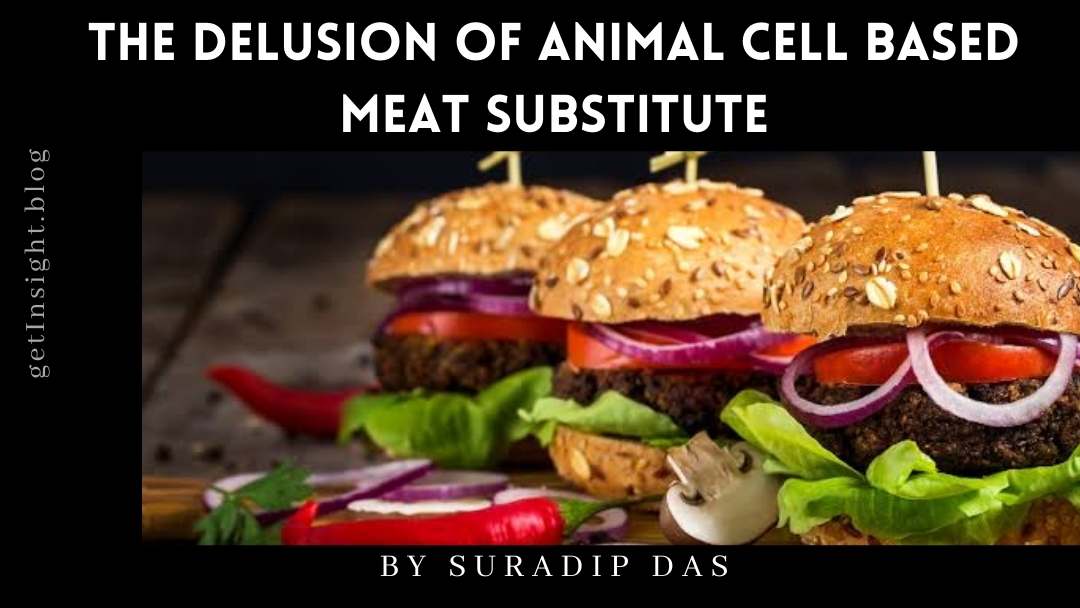 The meat substitute industry has grown exponentially this decade and is projected to have a market size of $7.5 Billion dollars by 2025. This rapid growth is driven by people’s movement towards a more environmentally sustainable, healthy as well as “ethical” or cleaner source of protein. Animal cell based meat and plant protein derived substitutes are the primary types of artificial or “Faux” meat being developed. To obtain a better appreciation of the science and technology of meat substitutes, it is important to have a clear understanding of some terminologies that are routinely used in this context, often in a careless manner.

Meat is not only Muscle

There is no universally accepted definition of Meat. For this article, we will consider Webster dictionary’s definition of Meat as “the flesh of an animal (especially mammal) as food”. Meat comprises of muscle (generally skeletal muscle), fat, nerves, blood vessels and connective tissue. From a culinary point of view, we also associate bones, cartilage and tendons when talking about meat from mammals, poultry, or fish. All these different tissues are involved in providing a sensory experience and nutritional value associated with a meat based dish.

Although muscle tissue comprises of bulk of what constitutes as Meat, we do not consume living muscle tissue (unless one is consuming raw). The muscle must undergo a biochemical conversion process upon death of the animal to become meat. This leads to stoppage of blood and oxygen supply, buildup of lactic acid and a net acidification of tissue which is critical for the natural flavor of meat.

Muscle cells do not generally multiply in adults. They grow longer and thicker with development (and exercise). But, when necessary (especially after injury), muscle can regenerative very fast. This is possible due to the presence of muscle specific stem cells called Satellite cells within a muscle tissue. These muscle stem cells or satellite cells gets activated upon injury and starts dividing and forming immature muscle cells called myocytes. The myocytes subsequently fuse with one another, stop dividing and start forming elongated regenerating muscle fibers. These muscle fibers ultimately replace the damaged fibers completing the process of regeneration.

Lab grown cell based “meat” is actually only muscle

In December, 2020, Singapore became the first country to approve lab grown chicken nuggets developed by a Eat Just, San Franciso based company. Cell based meat is developed in labs utilizing three dimensional culture of muscle fibers. Initially, a piece of muscle tissue is taken from the animal of choice (biopsy) and cultured in lab to isolate the muscle satellite cell population. Once a pure enough culture of satellite cells is obtained, they are then cultured on 3D substrates called scaffolds that provide structure to the growing tissue. These scaffolds are usually composed of edible polymers like gelatin (obtained from salmon/mammalian sources), alginate etc.

The satellite cells are fed nutrient rich formulations (also called culture media) that promote rapid cell division, growth, and formation of myocytes. These myocytes upon further culturing in media give rise to strands of muscle fibers which eventually fuse together to form muscle. It is noteworthy here that in laboratory cell culture setup, nutrients or oxygen can’t diffuse across a structure that is more than 200μm thick. Thus, cell based meat is only cultured muscle cells, usually developed in specialized bioreactors which are large vessels that allow for proper diffusion of oxygen and ensure cell survival within thick constructs.

However, meat is not only muscle. Fat is not only an important structural component of any meat, but the fat content determines the taste of the meat. Researchers are now attempting to develop in vitro fat production systems using similar cell culture techniques. The aim is to culture fat and muscle separately in lab and subsequently mix them together to achieve an appropriate fat content in lab grown cell based meat.

The science and technology behind growing artificial meat in laboratories using cell culture is exciting and holds a lot of promise towards developing a more sustainable and humane method of meat production. However, like many other disruptive technologies, cell based meat technology is plagued with hype and unsubstantiated claims.

One of the most obvious benefits of cell based meat is limited land requirement compared to conventional agriculture based meat production. It is also projected that cell culture meat industry will substantially reduce Greenhouse gas emissions and water usage. Although both are possibly true in the shorter run, we need to take a holistic view to assess the longer term environmental impact.

For example, cell based meat production will significantly reduce methane emission (arising from livestock farming) but we have to account for the increased CO2 emission largely due to fossil energy required to run cell culture incubators, biosafety cabinets and sterilization equipments.

Similarly, it is estimated that cell based meat will require 82-96% less water compared to conventional meat production. In this context, we need to consider that cultured meat will require sterile distilled water – 1L of which uses up 9L of normal water.

Further, water used in livestock farming is also utilized to grow crops and not only meat production. Considering the required scale of operations to meet the world’s meat demand, these issues will have a substantial long term effect on our environment which needs to be extensively analyzed.

Cell based meat substitutes will significantly do away with culling of animals and hence will be a major step towards providing a more humane way of meat production. It is to be noted however, that small amounts of animal tissue will be required to generate the cell cultures. Some cell culture media ingredients like Fetal Bovine Serum and growth factors are also derived from animal sources. However, plant based substitutes for these components are already coming up rapidly.

One of the major health benefits of lab grown cell based meat is that it allows control of type and content of fat within the meat. Regulating micronutrient content (like vitamins and minerals) within the cultured meat is still a challenge but can be achieved in near future. Additionally, since cell based meat is grown in controlled sterile environment there is limited chance of contamination with intestinal pathogens which often contaminate animal meat during or after slaughter.

Other health benefits attributed to cultured meat is either exaggerated or misconstrued. For example, animals are often administered antibiotics during rearing and can be exposed to pesticides leading to antibiotic resistance or accumulation of toxic compounds. Comparatively, lab grown cell based meat is presumed to be “clean” meat. However, this is not completely true since dividing muscle cells are often treated with broad spectrum antibiotics during culture. Hence, unless cells are cultured in antibiotic free media, this claim does not hold.

The major health and safety concern with cultured cell based meat is the proclivity of food industry/scientists to overlook human muscle physiology. It is estimated that the initial group of muscle stem cells divide repeatedly and rapidly to generate more than a trillion cells. The big red flag here is that under physiological conditions, muscle cells do not divide. They only divide upon injury. Hence, we are essentially simulating a post-injury environment.

Further, the rate of cell division is exponentially more than the normal rate. What would have taken an animal years to grow, we are trying to grow on a petridish in weeks. This is accomplished by pumping cell culture media rich in hormones (anabolics) and growth factor. This absurdly high rate of cell division induced by exogenous biochemicals along with the inherent postmitotic nature of muscle cells, poses unforeseeable risks including chances of genetic damage leading to mutated/cancerous cells.  There have been hardly any studies looking into these cellular-level implications of cultured meat.

Plant based meat is again a misnomer and is actually plant based protein products, to be more precise. Plant proteins derived from pea, soy, or wheat as well as fungi in some cases are primarily used to make these meat substitutes. The production of plant based meat usually involves three steps – (a) Isolation of target protein from source, (b) Mixing of plant proteins with other ingredients like fat and flour to develop meat texture and finally (c) processing and reshaping the mixture to give meat like texture and look.

In addition, heat-stable fruit, and vegetable extracts (e.g., apple extract, beet juice) or recombinant heme proteins (like soy leghemoglobin) are used to both recreate the color of fresh meat and change to brown upon cooking. Beyond Meat and Impossible Foods are two prominent companies making plant based meat. Bill Gates backed Beyond Meat uses pea protein whereas Impossible Food uses a blend of wheat, potato protein and coconut oil to make their “Faux” Meat products.

What is artificial meat made of?

Artificial meat is generally made of either plant derived proteins or comprises of animal cells cultured in laboratory environment.

What is cell based meat?

Cell based meat is a type of artificial meat developed by culturing skeletal muscle cells of specific animal origin in laboratories.

The technology behind lab grown cell based meat although environment friendly has several serious health concerns. Some of the major causes of concern include usage of anabolic hormones in culture and unnatural rapid cell division which increases the chances of genetic damage.

Neither plant based substitutes nor cell cultured meat are actually meat. Cell based meat is mainly targeted for conventional meat eaters who will be looking to shift towards a more sustainable and humane way of meat consumption. However, even the most optimist will agree that conventional meat is not going anywhere soon and animal cell based meat will have a long regulatory pathway before it can be approved.

The Myth of Cultured Meat: A Review