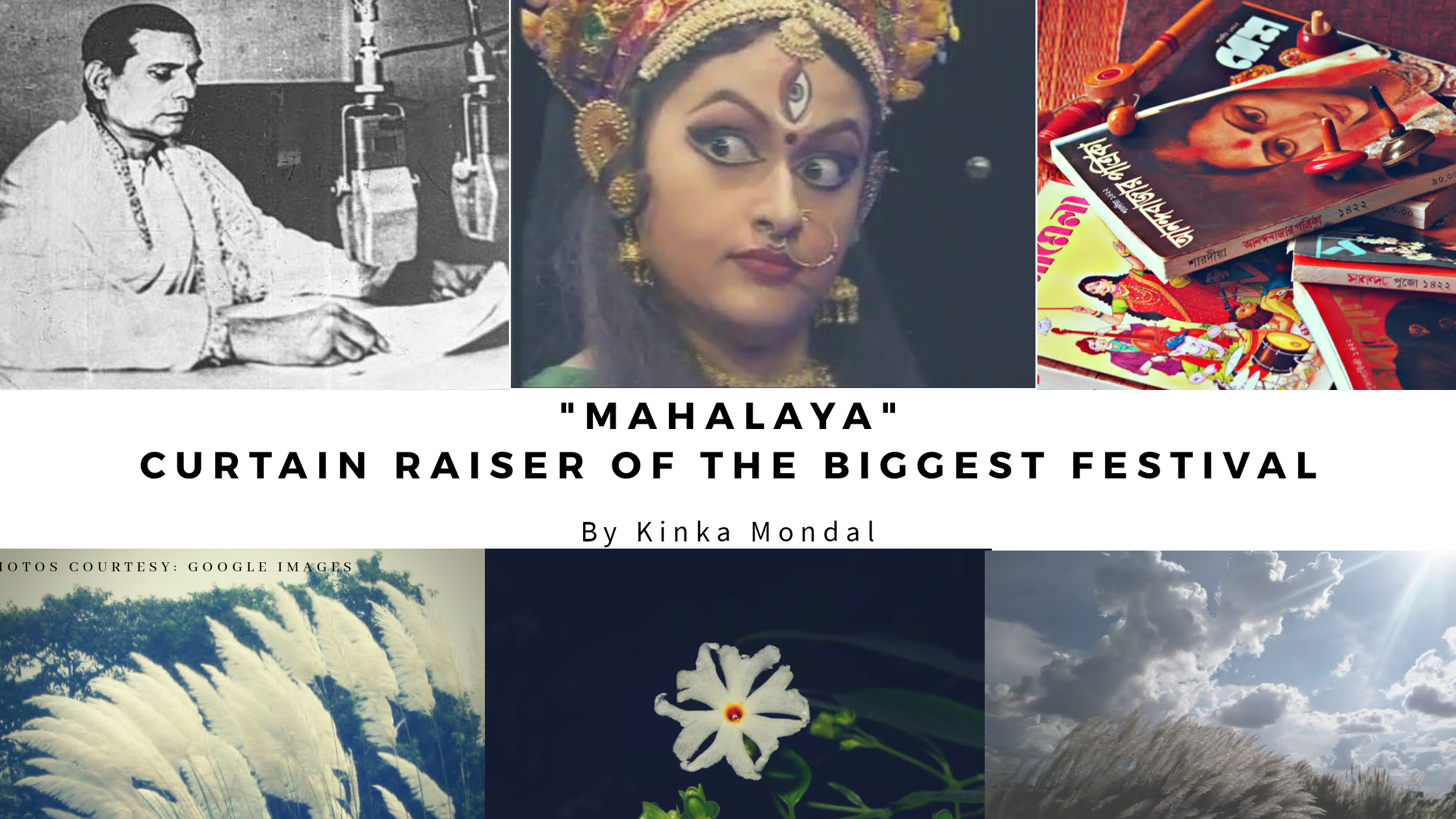 As I am writing today about the “Mahalaya”, (honestly my mind is overwhelmed with the thought of Pujo) let us focus on this special auspicious day in this article today. Mahalaya, as you can see in this title, it is the curtain raiser of Durga Puja. On this day, several important events take place every year and I am trying to shed light on those integral parts of Mahalaya here.

Mahalaya sets off a catharsis

The festive mood of Bengali community lasts throughout the year. But the biggest one is needless to mention- Durga Pujo! It is not merely worshiping the Durga idols, it is more like a celebration of Homecoming of Daughter for a few days. Just imagine in your own family, your sister is coming home after months post her marriage- you can understand the emotion behind this celebration of homecoming of Durga Maa. The celebration mode starts with that “Pujo-Pujo” feeling -the excitement and joy that a Bengali starts to experience when one fine morning he/she just wakes up after the monotonous monsoon and the view from the window of the deep blue sky with cotton-like clouds floating all over it. Yes! That means that Autumn has arrived, and Durga Pujo is synonymous to autumn here in Bengal. This feeling gets catalyzed by those “Pujo Special’ advertisements everywhere- outdoor billboards or on TV/FM. It is the time Bengali households start to plan to buy new clothes, shoes for their own, as well as, for their near and dear ones. And even office colleagues keep on asking- “How many new clothes have you received so far?’’ and trust me, there is a hidden pride if the number of new clothes you receive is the highest in your respective group.

The mythology behind Mahalaya

It is basically the 16th lunar day period of the Hindu calendar. It is believed that Maa Durga starts off her journey from Kailash to earth with her children- Kartik, Ganesh, Lakshmi and Saraswati on this day.

On the other hand, it is also the day, when Hindus (here, Bengalis) pay homage to their ancestors by devoting foods, fruits along with chanting mantras in River Ganges. You can find thousands of Bengalis following this tradition throughout the banks of Ganga River.Though it is an emotionally heavy ritual to perform, it seems like, the homecoming of Maa Durga to some extent helps to alleviate the emotional heaviness.

The “Mohishasur Mardini” show on Radio during Mahalaya:

Ask a ‘Probashi Bengali’ (ones who live outside the Bengal) , what does he/she miss the most on this day, you will get to hear – on Akashbani Radio, the broadcasting of Mahishasur Mardini in that well-modulated voice of Birendra Krishna Bhadra–“Aswiner Sharodo Prate, beje utheche alok monjir”(The light-trinkets have marked the autumnal dawn escorting the impending arrival of the Mother) at sharp 4a.m. followed by the beautiful track “ Bajlo tomar alor benu, Matlo re bhubon” ( The universe is up in ecstasies with the flute of your aura). In every corner of Bengal, you will get to hear this recorded broadcast every year. With this one and half hour program, we can tell that Pujo is officially knocking the door now!

The Devi Durga Show on Doordarshan:

Now with all the family members, Bengalis sit in front of the TV, tune in to Doordarshan Channel to watch the special show by Kolkata Doordarshan on Devi Durga. This program beautifully represents the mythological aspects of Maa Durga and how she becomes “Mohishasur Mardini” by exterminate the evil powers, thus saving the immortal and mortal province. Though, nowadays, every other Bengali channel telecast such conceptual show with leading actresses every year, but no one can beat the “Devi Durga’ show by prominent dancer Sanjukta Banerjee as Durga on Doordarshan channel.

A glimpse of the show you can watch here:

It is a thumb rule for brands that they should have the ability to connect with their target audience emotionally. If you watch Bengali TV channels this time, you will get to see innovative heart-warming special Durga Pujo edition advertisements. Be it brands like- Thumbs Up, or Shalimar oil, or Restaurants like- Oh Calcutta, every organisation plans differently to grab attention of Bengal by trying to connect with their Durga Pujo sentiments.

A morning stroll to Kumartuli:

Kumartuli, in North Kolkata is the place where the Durga idols are made from scratch. On this day of Mahalaya, one can find the youth community of Bengal are assembling to this place to experience live – the “Chakkhu-Daan” (The eyes of Maa Durga painted by the artists).

One Bengali trait that no one can deny is their bibliophilic nature. Every year, in the month of august different publishing houses launch Pujo themed Magazines, known as – Pujobarshiki. To name a few- Suktara, Kishore Bharati, Anandamela for children and teenagers and for adults, Desh, Potrika, Anandolok etc.

Also, there was a golden era of Bengali music, (reminisced by generation X), when every year during this time new music would be launched by artists like- Kishore Kumar, Lata Mangeshkar, Asha Bhosle and who not.  Those songs are extremely popular even till today. Though, in present time, this tradition has ebbed, because of the increase in pirated music availability.

For a Bengali, it is always difficult to wrap up the story when it is about anything related to Durga Pujo. This year Mahalaya is on 17th of September, a month prior to the main festival days of Durga Pujo- a rare event as per my knowledge.Though the crisis is yet to fade away from this earth, still there is hope that Maa Durga will save the earth this time as well, like she has always, as Mahamaya. As I am signing off, I bet, you are also feeling excited for the homecoming of Maa Durga!

I would like to encourage my readers to add any special events (If any) in the comment section to let the world know more about our greatest festival.

Special thanks to Upasana Bandyopadhyay

0 thoughts on “MAHALAYA: CURTAIN RAISER OF THE BIGGEST FESTIVAL”