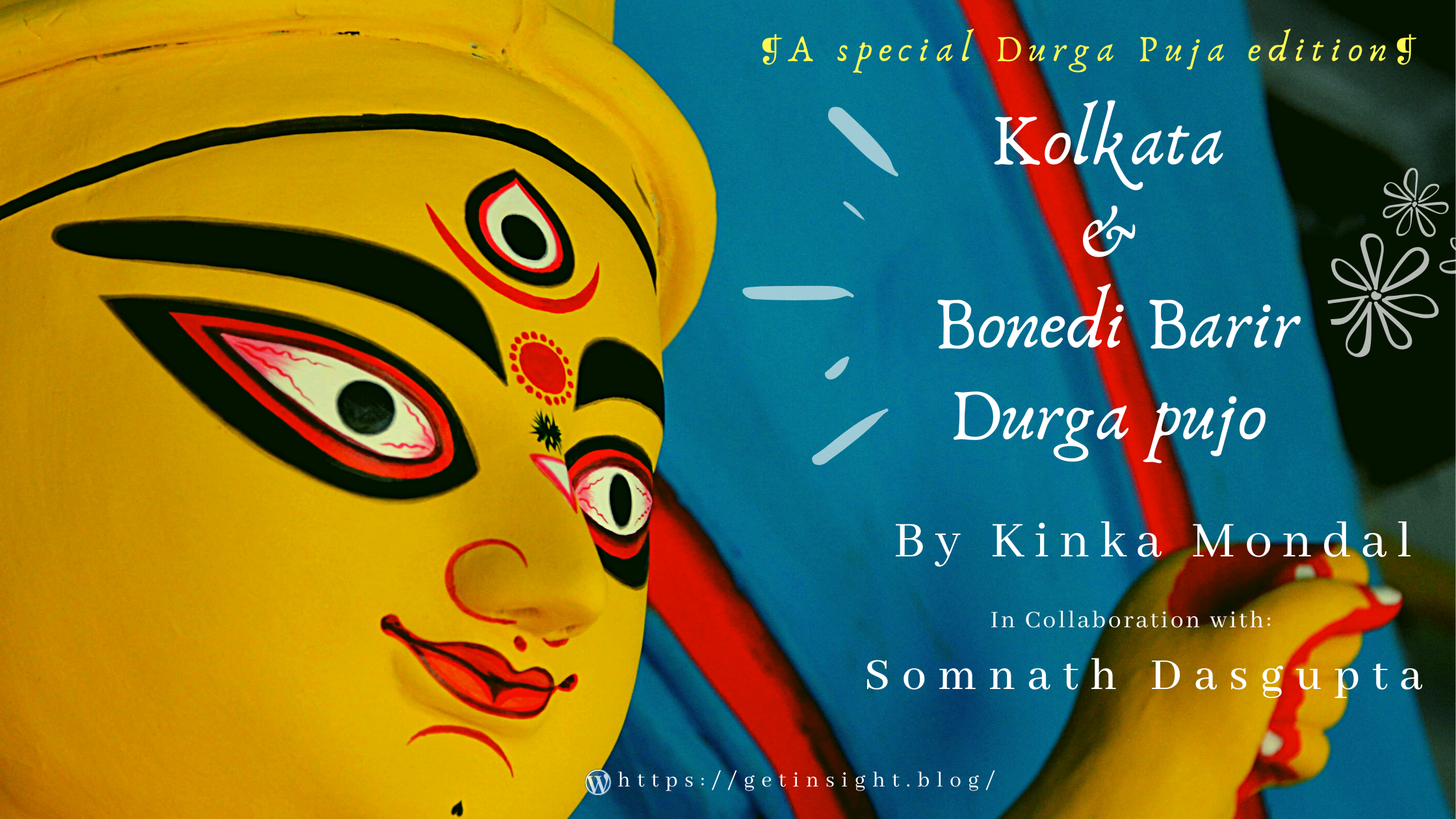 By Kinka Mondal ( In collaboration with Somnath Dasgupta)

The illuminated bright streets, cacophony of clamored crowd mixed with various other sounds, lots of temporary food stalls around the footpaths and tired-yet-excited people in the long queue outside the pandals- precisely describe the typical days of Durga Pujo in West Bengal, especially in Kolkata. Pujo Committees of different local clubs make all the arrangements for a week or so with the help of state administration; this typical and most popular arrangement is termed as – ‘Barowari Pujo” (means, public organization of religious or similar kind of entity). Before the popularity of Barowari Durga Pujo in West Bengal, Durga Pujo was mainly celebrated by affluent Bengali families (like-Raja, Jamidar) referred to as “Bonedi Barir Pujo” and was in extremely limited numbers. Though nowadays, there are hundreds of Barowari Pujo being organized, the charm of “Bonedi Barir Pujo” is still unbeatable.

So, today we will centre our discussion on a few such Pujo that have been celebrated for centuries at several aristocrat’s homes in Kolkata. Every Pujo has a tale behind and a few distinctive rituals which are fascinating as they are still being followed by the descendants of the respective families.

Let us dive into the virtual travel through a few Bonedi Bari and their Durga Pujo celebration:

The great Sabarna Roy Chowdhury house is located mainly in Barisha, Behala. It is the oldest Durga pujo in Kolkata, being organized from the year 1610. The most amazing fact about the Roy Chowdhury family is the British rulers got the right of three villages- Sutanuti, Gobindapur and Kalikata from Roy Chowdhury’s and a new city, Kolkata- the City of Joy was shaped up.  Many more historical events are associated with the great Roy Chowdhury family of Kolkata. The Roy Chowdhury family have their own museum, named- “Sabarna Sangrahashala” at Barisha, Kolkata, which is a great place to know more about heritage of Kolkata and Bengal.

They have a very distinctive pattern for their Durga idol, it is called – Aatchala and maintain specific colour for the idols every year. Though these centuries old pujo has been downsized in terms of spending money than before, still the traditional touch of old Kolkata has kept the charm alive till today.

Maharaja Nabakrishna Deb (1737-1797), the founder of the great royal house at Shobhabazar, Kolkata (now in North Kolkata) started the Durga Puja in 1757 after the British East India Company defeated Siraj-Ud-Doulla in Palashi Battle as a way of celebrating the victory of the British. Presently, there are two pujo which are being celebrated separately- The Boro Torof (the main pujo that started 248 years ago) and the Chhoto Torof, which is 231 years old. Robert Clive was actively involved in this pujo of Shobhabazar Zamindar Bari. They also have their own tradition and rituals which make them unique and one of the favourite pujo destinations of Kolkata. Maybe due to this devastating pandemic, the entry of outsiders will be barred by the family this year and will only be opened for the family members.

Khelat Ghosh Bari is also in North Kolkata, specifically in Pathriaghata. Khelat Chandra Ghosh was the grand son of Ramlochan Ghosh, who was a clerk of Warren Hastings. The palace has a 85 ft long corridor with antique fine marble finish; the largest Thakur-Dalan (the three sides open courtyard covered with a roof, where the pujo arrangements are done ); the huge dancing hall (now Khelat Ghosh Hall)- one can surmise from this information how grand the palace actually is!

Coming to their Durga Pujo celebration, it was started in 1846 by Babu Khelat Chandra Ghosh. They have distinctive “Daak er Saj” (silver decoration of the idol) for the Maa Durga. They offer homemade sweets to Maa Durga- which is one of many rituals the family is still following.

The Daws of Jorasanko has been celebrating Durga Pujo since 1859 originally started by patriarch Narasingha Chandra Daw. Although they were the leading manufacturers of gun powder at one point in history, Late Narasingha Daw built a Thakur-dalan within their family home for organizing Durga pujo. For more than 150 years, this “Bonedi Barir” Durga Pujo has been organized every year following the same rituals and traditions as per “Brihannandikeshwar Purana” of Vaishnav faith. As per popular folklore, it is believed that Maa Durga visits the Daw family Puja to adorn herself with ornaments.

For this heritage family, Durga Puja begins in the month of Sravan (the 4th month as per the Bengali Calendar) during Rathayatra with fabrication of the main framework of the idol (Kathamo Pujo). Till date, the idol has always been created by one family from Howrah. The Durga idol is first painted during Pratipod and the women of the family welcome Maa Durga during the same day (Bodhon) by adorning her with gold and precious stones studded ornaments as per rituals. Maa Durga is treated as the daughter of the family and her homecoming is celebrated in traditional yet grand way.

I wish I could mention a few more, like- Jaanbazar Rani Rashmoni Barir Pujo, Purna Charan Dhar Pujo, Narashima Dawn Pujo, Madan Mohan Dutta Bari , Baghbazar Hardar bari – amongst the endless list of Bonedi Bari Pujo celebrated in Bengal. The majestic grandeur of the centuries old Pujo not only serves the purpose of prayers, but it is more of celebration of homecoming of the daughter- one can literally feel the festivity in every corner.

Though the families keep their doors open for the visitors but considering the unfavorable consequences due to the present pandemic, they might surely limit the degree of celebration this year. As a responsible citizen, we also must plan our celebration very carefully keeping mind the guidelines set by Government. Signing off with the hope that Maa Durga will lead the way towards eternal joy and happiness.

Have a great and safe Pujo!

Note: The information used here are solely collected from internet. No interviews were conducted with any of the mentioned family members.