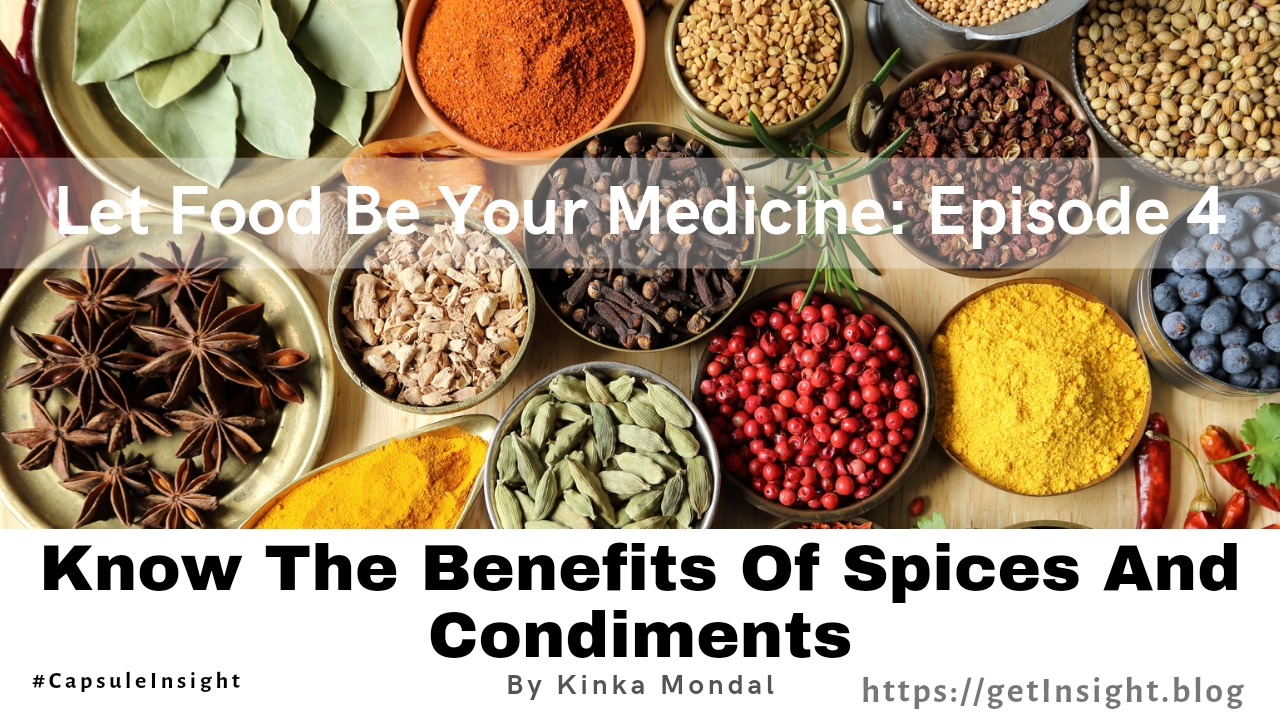 Spices and condiments are the aromatic food substances that add flavour to our food, be it curry, sweet dishes or bakery products. Spices and condiments are the integral ingredients of any food preparation. Spices are mainly dried roots, barks or flowers , used as whole or grounded forms. There are innumerous spices available in market worldwide, but today we will know about some spices which we , Indians use primarily.

General functions of Spices and Condiments:

General functions of spices include:

A few common spices and their benefits:

Here we will know some benefits of widely used spices and condiments:

Asafoetida is a gum resin from the roots of Ferula asafoetida. The odour component od asafoetida is nothing but the volatile oil of chemical compounds. Asafoetida is mixed with starch to dilute the strong odour before its marketed. “Hing” is the common term used in India for asafoetida and s widely available in market.

Asafoetida helps to increase the detoxification enzymes in the body. It also acts as anti-microbial agent if used in foods. In ancient times, it was used to treat whooping cough and chronic bronchitis.

This belongs to the ginger family. Its aromatic seeds are primarily used as spices because of the distinct flavour. Cardamom seeds contain 2-10% of volatile oil. It is a bit expensive among spices, but often after extracting the volatile oil cardamoms are sold at cheaper prices in markets.

Cardamom is widely used for its flavour in different food preparation. In cooking, for making curries, or an integral part of “Garam Masala”, and in any sweet dishes, cardamom is very popular spice.

Cinnamon is the most frequently consumed spice in the world , also relatively less expensive. Cinnamon is the inner dried bark of the cinnamon trees which is irreplaceable for its aroma.

Cinnamon is used in stick form as well as in grounded form. It is also an very important ingredient of “Garam Masala’ which is used to cook curries and many more. In bakery industry, cinnamon is very popular, cinnamon rolls, doughnuts and other sweet dishes are very well-accepted globally.

In India, it is cultivated in Nilgiri region. The unexpanded clove flower buds are dried under the sun until it is dark brown. Clove oil is very famous not only as flavouring agent, but also because of its medicinal properties. Clove oil is natural anti-oxidant, which is the highest among all the spices. It also helps in soothing mild to severe tooth-aches as it has analgesic and anesthetic properties. Apart from that, cloves are used in cookery widely for its flavour.

Turmeric is basically used in cooking as a colouring agent(Curcumin) . But it has plenty of medicinal values including: detoxification of harmful chemicals and drugs; reduces stomach irritation; it is also very well-known for curing common cold, sore throat, cough. The active ingredient, curcumin, helps to inhibit bacterial growth. It is also very popular as anti-carcinogen and anti-oxidant.

Ginger is widely used for cooking and a very common remedy for cold and migraine headache. It also has anti-oxidant properties. The active ingredients in ginger help in alleviating nausea, motion sickness and reduce inflammation and joints pain.

Garlic is one of the widely used spices in the world. It contains an anti-biotic component, “Allin” (which converted into Allicin in presence of enzyme Allinase); when the garlic is crushed, it gets activated and further breaks down- the pungent smell of garlic comes from this.

The medicinal value of garlic is infinite. It not only helps in treating some digestive disorders, but also very much potential to fight against gram positive and gram negative bacteria. Garlic also possess hypoglycemic property which means it helps in controlling diabetes. It is said that garlic also helps in maintain serum cholesterol level and prevent heart related ailments. Garlic has immuno-potentiating effect as well, it stimulates natural killer cell activity.

Onion is a very familiar as flavouring agent in cooking. It enhances the overall flavour of the cooked dish by masking any undesirable flavour . It is believed that onion (raw or cooked) helps in maintaining blood glucose level. Onion alone, as well as with garlic possess strong anti-microbial activities. It also helps to maintain a good heart health.

Coriander seed is native of Mediterranean region. It is unmatched for its fresh and delicate aroma. Coriander seed is not only used as flavouring and thickening agent in cooking, but also has distinctive medicinal uses for years. It helps in treating intestinal disorders. coriander seeds contain pthalide which helps to increase anti-cancer protective enzymes in body.

Fenugreek seeds or methi have a distinctive astringent aroma. It contains soluble and insoluble fibre. Fenugreek tastes bitter as it contains 5% bitter fixed oil. Methi is very popular as home-remedy of controlling non-insulin dependent diabetes. In some places, it is used with buttermilk to treat dysentery. Fenugreek seeds are used in pickles to add flavour and increase the quality.

Monosodium Glutamate is very famously known as “Ajinomoto” which is a Japanese brand. It is used in cooking as a taste enhancer. MSG has its distinct flavour, but while we use it in cooking it only enhance the quality of the existing flavour of the food. Thus MSG is called “Flavour Potentiator”.
The joint advisory body of Who and FAO has stated that MSG does not causes any harm if used in any foods , but use of MSG should be avoided while preparing foods for infants and children below 12 years or so.

These were the most widely used spices in India. In Ayurveda , spices are very important constituent. Spices are not only serve as flavouring agent, but adding spices in required quantity to foods can help us to stay healthy and disease-free in multiple ways.

If you have any further question write us back. We will be happy to share more facts with you.

You can find more articles on ” Let Food Be Your Medicine” series here:

2 thoughts on “Know the benefits of Spices and Condiments”